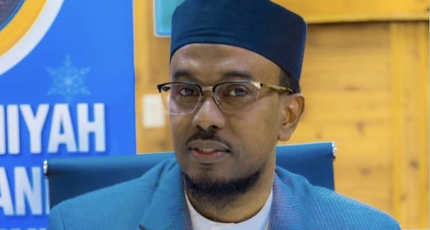 In their latest update on the investigation, police released a 15-second video clip taken on the evening of Dec. 22 — the day before Adam's family filed a missing person report. The scene was captured by a security camera at an apartment complex close to where Adam's body was found, Columbus police Det. Earl Westfall, the lead investigator on the case, told the Dispatch.

The video shows that someone other than Adam was driving the van. The person appears to be wearing a red bandanna and white or latex gloves. It is difficult to discern the man's features because his face was covered by the bandanna, according to Westfall.

“We’re asking for the community's help if anybody recognizes him or can shed any light on what was going on at that time,” Westfall said during a Friday press conference.

At the press conference, Shukri Hassan, Adam’s daughter, urged law enforcement, local organizations, and community members to come together to find the perpetrator as soon as possible.

“We cannot heal until we bring the perpetrator to justice,” Hassan said. “We need answers quickly. Every day that passes is another day that my father's murderer remains at large. Please, if you have any information, come forward and call.”

The Ohio chapter of the Council on American-Islamic Relations previously offered a $10,000 reward for information leading to an arrest in the case. On Friday, the organization announced that it had increased the amount of the reward to $20,000.

"Too often, the homicides of Black, immigrant men are overlooked, disregarded, forgotten," said Amina Barhumi, acting executive director of the CAIR-Ohio chapter. "And we really refuse to let that happen here today."

Muslim community members said they were traumatized by the imam's death

Adam’s death has left many Muslim residents traumatized and desperate for answers, according to Imam Horsed Noah, outreach director at the Somali Islamic Centers of Ohio.

“We have so many young brothers who got shot in Columbus, but this was an imam who taught to thousands, and all of the sudden, their spiritual leader was kidnapped and killed,” Noah said. “People are calling me from all over the country and from Kenya, Europe, Somalia, and Ethiopia to ask me what happened. We have never imagined this would happen to us.”

Abdishakui Mohamed, the late imam’s cousin, said he experienced the shock and trauma of the death firsthand.

After Adam’s family first noticed he was missing and filed a missing person report, community members put together a search party and sent out dozens of volunteers to look for Adam. Mohamed said he was one of the volunteers who first discovered Adam’s body in the van and reported it to the police.

“I was very emotional when I saw my cousin’s body,” Mohamed said. “He was laying there. I recognized his clothes, his shoes. I was nearly fainting, and other people had to take me out of there.”

Abdirizak Ahmed, a Dublin resident who used to attend Adam’s mosque, said the homicide has left him fearful of his own safety. The owner of a home health business in Westerville, Ahmed said he used to work from his office till midnight but now would make sure to get home before sunset.

“I’ve never felt this kind of fear that I’ve been feeling after the imam was killed,” Ahmed said. “And the longer we wait for the investigation result to come out, the worse the fear our community is experiencing.”

Investigators are asking anyone with relevant information to call the Columbus Police Homicide Unit at 614-645-4730 or Central Ohio Crime Stoppers at 614-461-8477.

US rebuts claims that Biden invited Somali president to Washington

Hassan Sheikh Mohamud has welcomed Biden’s decision as an important step towards the stability and fight against terrorism in his Horn of Africa country which is dealing with the threat of the Al-Shabaab group.