Hassan Sheikh was re-elected in May 15 election as the 10th president of Somalia after beating Farmajo, who lost his race for a second term in the office after five years in power. 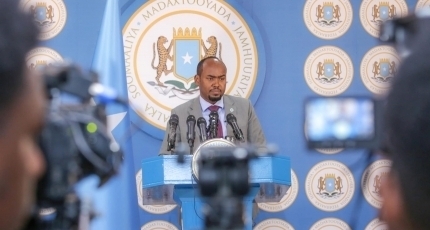 MOGADISHU, Somalia - Villa Somalia says the president is in good health after contracting Covid19 last Friday upon his arrival back to Mogadishu from a days-long maiden visit to the UAE.

The president has been diagnosed with the virus after members of his delegation tested positive for Covid-19 when they arrived in Abu Dhabi last week which extended their stay in the Gulf country.

Hassan Sheikh announced on Friday that he has self-isolated and will continue the work from home until he tests negative for the coronavirus that killed 1,361 people in Somalia since 2020.

Mohamud, 66, was inaugurated this month to serve as president for the next four years. He is the first leader in the Horn of Africa to win a second chance to return to power.

As his spokesman Abdikarin Ali Kaar announced on Monday during a press conference, the president is undergoing continuous check-ups at home and will return to the office in the coming days.

The president has a difficult task ahead of him, as his country faces a severe drought, the fight against Al-Shabaab, and the formation of a new government, which PM Hamza is mandated to form.

Hamza Abdi Barre, a member of the president's UPD party was appointed this month as 21st PM, replacing Mohamed Hussin Roble, who is credited for holding the elections after delays over the political crisis in the country.