The leaders of the Federal Government and regional states have been in deadlock over the electoral process for months before reaching a deal on May 27. 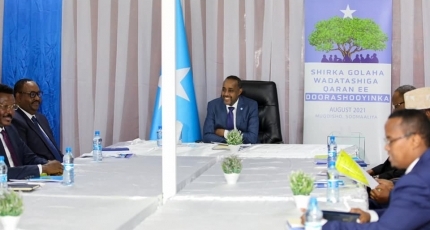 MOGADISHU, Somalia - The top Somali political leaders are gathering for the second consecutive day in Mogadishu to find a solution to the nation's electoral crisis.

Sources close to the office of the PM said that the negotiations at the Afisyoni tent near Mogadishu airport are progressing well and that the federal and regional leaders can reach an agreement over the existing challenges that delayed the poll deadline.

The PM-led talks seek to review the progress and challenges in the implementation of the May 27 electoral deal that allows the country to hold an indirect election after failure in the long-awaited universal suffrage at the end of Farmajo's term last February.

The forum began on Saturday after complaints came out of the Senate election that was held in some regional states with the voting process marred by favoritism and corruption, a move that threatens the transparency and integrity of the elections.

The regional leaders were given authority to pick the candidates running for the Senate seats and that move led to a rivalry and division between pro-opposition and pro-Farmajo states.

Meanwhile, protests against AMISOM continue for the second week in a row in Mogadishu, with people demanding to bring Ugandan soldiers who killed seven civilians on August 11th in the vicinity of Golweyn in the Lower Shabelle region to justice.

On Saturday, Somali PM Mohamed Hussein Roble summoned the Ugandan ambassador in Mogadishu and AMISOM chief to question the civilian killing and appointed a ministerial committee to probe into the tragic incident which sparked public outrage and rallies.

AMISOM pledged to conduct a swift and transparent investigation as the AU mission said that those killed were not members of Al-Shabaab, changing its previous statement saying the dead are terrorists. The murder came after an Al-Shabaab ambush on a UPDF convoy.