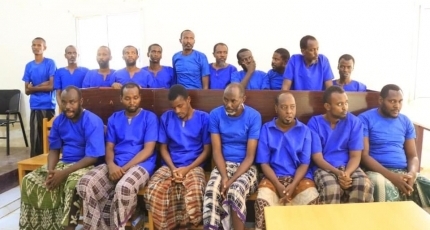 GALKAYO, Somalia - Puntland, a regional state in northeastern Somalia announced on Sunday it has publicly executed 21 Al-Shabaab fighters who were found guilty of orchestrating series of assassinations and bomb attacks in Galkayo over the past 13 years.

The terrorists have been sentenced to death by a military court in Galkayo last month before they faced the firing squad on Sunday, June 27 shortly after Somalia marked 61 years of independence.

Court official said 18 out of the 21 convicts have been shot dead in Galkayo, two in Garowe, Puntland state capital, and one in Qardho district, all executions happened within one hour on Sunday morning.

It is the highest number of terrorists to be executed in the conflict-hit Somalia in a single day since the war on terror involving the U.S. military began in the country almost 15 years ago.

The execution comes a day after Puntland security minister Abdisamad Gallan has survived an attack that targeted his convoy near Balli-dhidin area in the Bari region. At least one soldier was killed in the landmine blast.

For many years, Puntland has been facing a growing terrorist threat to its security after ISIS and Al-Shabaab established attack and training bases in the mountains of the Bari region.