Al-Shabaab and ISIS have bases in the mountain ranges in the Bari region, where they train their fighters and orchestrate the attacks. 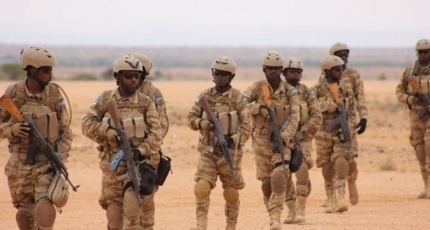 BOSSASO, Somalia - Puntland security forces [PSF] kill at least two ISIS-linked militants as they continue the fight against the terrorist groups hiding in the mountain areas in the Bari region on the Gulf of Aden.

Security officials in the region say the regional forces have killed at least two Islamic State fighters after their military convoy was hit by two landmine explosions near Hamure village in Balidhidin on Tuesday, leaving one soldier wounded.

The slain ISIS members were a bomb expert and a cameraman who was shot dead by the troops while filming an ISIS IED attack, said PSF in a statement, adding that equipment and explosive materials were also recovered at the scene.

"Among the ISIS members killed by the PSF was a camera who has this recorded an explosion targeted a convoy carrying Puntland security minister outside Balidhidin town and posted the propaganda video on the Internet," added the statement.

Puntland is at war with terrorist groups, including an ISIS-affiliated faction founded in late 2015 by a Somali-British extremist Abdulkadir Mumin who defected from the Al-Qaeda-linked Al-Shabaab after a fallout with the group's top leaders.

In addition to the jihadist threats, Puntland is facing an internal crisis and lost Sool and parts of Sanaag to Somaliland, the northern breakaway region whose forces seized control of Tukaraq, a strategic area located just 60Km away from its capital Garowe in January 2018.