Mogadishu (KON) - Let me breifely take you back to the memory. I am all up for improvement mainly economically and stability, this was the warm words of Abdiweli during his election period, let’s have that conversation, let’s take that forward.
Warar Keydmedia Online
4 September 2014 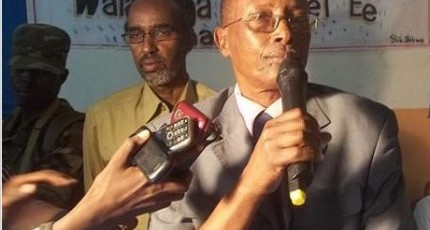 So far, Abdiweli appear to be he is partly failed for every index of progress that puntland people were expecting under his watch. Misplacement of priorities remained at large for every corner.

I believe that Abdiweli Mohamed has a capacity to be a great leader, and always admire him for his courage and determination towards his people but, what binds me is, withdrawing from the member of parliament MP’s recently that was originated from puntland. This was an evidential of Abdiweli’s in ability to combat the Federal Government and his lack of alternative approach.

This seems to me a complete and utter lack of political skills and ill informed, a good sensible leader ought to know which battles to fight and where to draw the line. Abdiweli has made some silly pretty calculation that you really wonder if the guy really smart as speculated or if he simply an opportunistic cashing in, perhaps one can say that he was nervous at many levels, but this was far beyond the through. Only fools would consider him as great leader if you judge him by the words coming out of his mouth Puntland can’t perform alone (Lap-dancing) and by many of his actions

How did you fare one year on:- Let’s start with what he has done so far, he has spent a considerable time by touring in Mudug regions i.e (Garacd, Gardafuu etc) but he neglected in other areas where needs to be focused for the first term in his post.

I honestly do not know what motivates him. In my opinion Gas took all the credit for one of his predecessor’s success Farole who has fixed economy and minimized the inflation by 0.4% whose objective was a clear consequence for public value.

The first question is whether Puntland could hack it alone? The classical answer to this question is actually “NO” *** if any of you believe that Mr Gas is genuine leader, I have an Iceland to sell to you in the pacific. Puntland people are beginning to lose the confidence in him.

Initially many thought that he is going to be different from his predecessors but ant decent thinker of puntlader would now know the way he has handlded every thing.  Nicholas Mcavelli quoted “ the end justifies the meaning”.