The meeting follows a new agreement on the Lower House electoral process that was signed between the PM and regional states in Mogadishu. 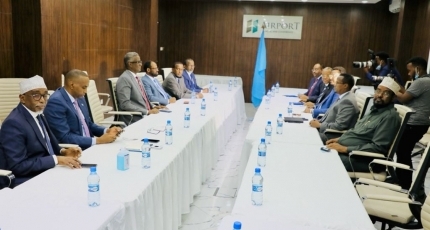 Sources privy to the closed-door meeting told Keydmedia Online that the regional heads are trying to persuade the opposition to accept the controversial process for the Lower House election which many believe could lead to pre-election violence.

It's clear if the opposition will change their decision to reject the new deal signed at Afisyoni tent on Sunday following a two-day forum between the Federal Government and the regional states.

The National Consultative Forum [NCF], which brings together the PM and the heads of the five federal States as well as the mayor of Mogadishu were accused of hijacking the election after disbanding the registered 135 elders set to select the 27,775 electoral delegates will choose the 275 MPs of the Lower House.

Somalia has been beset by three decades of conflict and is still prone to war as the country is governed by rival sides, including the Al-Qaeda-linked Al-Shabaab group fighting to topple the UN-backed government.

The election was delayed twice since last December due to a protracted political dispute over the process that finally ended last May after PM Mohamed Hussein Roble was given the power to manage the polls and security.

This came after Farmajo, the outgoing president disowned his two-year term extension that caused a battle in Mogadishu streets between pro-opposition forces and the army in April.