The outgoing President who previously failed to save the nation from the current uncertainty has otherwise created unrest and distrust. 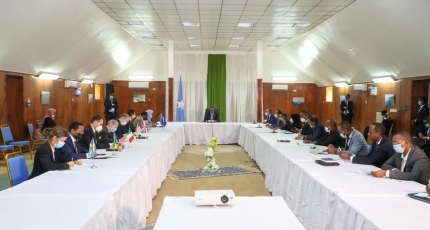 MOGADISHU, Somalia - The caretaker Prime minister of Somalia, Mohamed Hussein Rooble has held a meeting with foreign diplomats at Afisyoni camp near Mogadishu airport on Wednesday.

The talks focused on the current political situation in the country and the deadlock over the general elections in the country that had been delayed twice due to the stalemate between the stakehlders.

The PM is seeking ways to facilitate the electoral process with the help of the donors ahead of the much-awaited conference between the Somali government and the Federal States expected to take place on 20th May.

The meeting is the first of its kind PM Rooble had to engage in since the security responsibility and handling the process of the elections under the 17 September agreement was handed over to him by outgoing President Mohamed Abdullahi Farmajo.

The PM asked the donor to resume their support to hold an immediate inclusive election in the country amid many obstacles surrounding the process. Rooble is dedicated to seeking necessarily all he could to get it done.

The outgoing President who previously failed to save the nation from the current uncertainty has otherwise created unrest and distrust. To find viable solutions to the defection troops who rejected the extension term, the elections deal, and many others are standing in his way.