Rooble representing Farmaajo in the inauguration ceremony of Djibouti’s Geelle 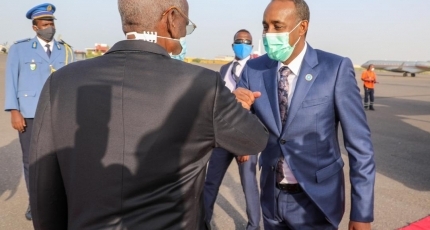 Djibouti, DJIBOUTI - In a statement released by the PM office, Rooble has embarked for Djibouti to participate in the inauguration of the neighboring nation of Djibouti’s President who had won the recent elections.

The outgoing President, Mohamed Abdullahi Farmajo and his counterpart will not attend the ceremony, despite attending the inauguration of Uganda's Museveni earlier this week.

Farmaajo has returned to the country after a two-day invitation to Uganda to participate in the inauguration of Uganda President, Yoweri Museveni.

Rooble’s journey to Djibouti is a clear indication of how far the outgoing President disregarded the Somalia-Djibouti ties that existed for decades.

The bilateral ties between Djibouti and Mogadishu remained intense with Somalia blaming the Gelle administration for interfering in Somalia's internal affairs.

Last month Djibouti’s veteran ruler Ismail Omar Guelleh was re-elected for a fifth term as president with more than 98 percent of the vote.

Guelleh was the handpicked successor to his relative Hassan Gouled Aptidon, the country’s first president after independence from France in 1977.