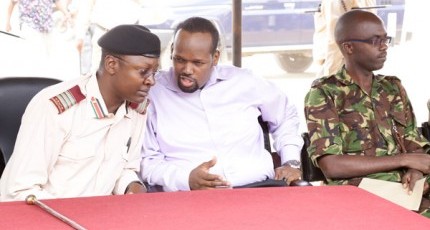 Governor Ali Roba said although no one had been arrested in connection with the attack, he was optimistic the culprits would soon be apprehended.

Speaking during a security meeting, Mr Roba urged the youth to engage in gainful activities other than being used to carry out terror attacks.

He was accompanied by County Commissioner Alex Ole Nkoyo.

He warned that his government would not give in to threats by the militant Al-Shabaab group based in neighbouring Somalia.

“We will neither succumb to their threats nor shy away from talking about them. We will fight them by all means possible,” Mr Roba said.

GIVE INFORMATION TO POLICE

The governor also encouraged Mandera residents to give useful information to the police to help fight terrorism.

The security meeting which brought together all the county stakeholders was used to discuss the underlining issues that may be contributing to insecurity in the area.

Mr Ole Nkoyo said clanism was the main cause of the insecurity in the region as some communities only thought of shielding their own.

On Monday, eight heavily armed attackers suspected to be members of the Al-Shabaab hurled a locally manufactured rocket propelled grenade (RPG) at the Mandera County headquarters.

The attackers who were repulsed by Kenyan security personnel after a heavy gunfire destroyed parts of the offices but no one was injured.

Mandera Deputy County Police Commandant Bosita Omukolongolo said based on the kind of devices used the attackers were most probably Al-Shabaab militants.

The attackers had earlier terrorised the residents of Omar Jilaow, a small town in Arabia division and looted property of unknown value from shops in the area.

"This will not deter us from our work. It has only gone a long way in increasing our commitment in fighting terror threats within our county,” Mr Roba said.

The governor also appreciated the swift response by the security team in countering the attack.

The attack came at a time when peace had prevailed in the border county after the recent clashes between the Garre and Degodia communities.

Some locals said they suspected the attack on the county headquarters could have been a continuation of clan fights.

On Tuesday, security personnel combed the county in search of the attackers.