Seven wounded in an explosion in Somali port city

The city has been under the control of a Kenyan ally Ahmed Madobe who long fought for the terrorist groups in Somalia. 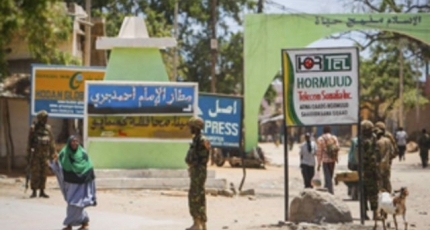 KISMAYO, Somalia - At least seven people were reported to have been injured in a grenade attack in the southern Somali port city of Kismayo on Wednesday night, police said.

A witness has confirmed to the Keydmedia English Service that a heavy explosion was heard across the city in the evening and followed by sustained gunfire at a police checkpoint in the Somali star neighborhood.

Several traders who were running small businesses along the street, including a milkwoman have sustained slight and grave wounds from the attack which comes amidst tight security measures in the city ahead of the parliamentary election.

On Wednesday, the regional parliament has endorsed a new cabinet appointed by Ahmed Madobe with most of the members are hailing from the president's clan.

There was no immediate claim of responsibility for the bombing but it bore all the hallmarks of the Al-Shabaab attacks in Somalia, where the group is waging a decade-long insurgency against outs UN-backed government.