Hashi stated that SNA won a significant victory in the battle and had the upper hand in the offensive aimed at dislodging Al-Shabaab from the small strategic areas between Mogadishu and Jowhar district. 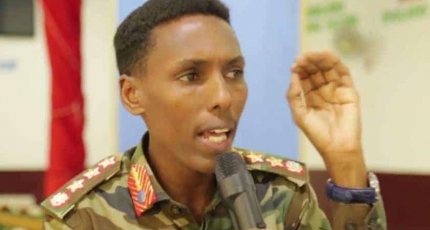 MOGADISHU, Somalia – A top military commander says Somali National Army [SNA] forces have dealt a heavy blow to Al-Shabaab terrorists in an ongoing intense operation in the south of the country.

Colonel Ali Hashi, a spokesman for the (SNA, reported the government troops had killed more than 70 members with the Al-Qaeda affiliate during the latest clashes in Jilable village in the Middle Shabelle region.

“The Somali National Army [SNA] has attacked Jilable town in the Middle Shabelle region where Al-the militants were hiding. Over 70 terrorists, among them senior leaders were neutralized,” he added.

Hashi stated that SNA won a significant victory in the battle and had the upper hand in the offensive aimed at dislodging Al-Shabaab from the small strategic areas between Mogadishu and Jowhar district.

“We’ve gained a major victory in the battle against Al-Shabaab terrorists as we continue the ground assault on their remaining strongholds. We killed more than 70 of them and captured key areas,” he stressed.

The fighting in Jilable has resulted in casualties among the Somali National Army, including major Mohamed Abdiwahid, the commander of the 6th Battalion of Gorgor, an elite force trained by Turkey.

Somali army chief Gen Odowa Yusuf Rage who is leading the operation confirmed the death of the senior officer, vowing to wipe out the militant group from the entire country ahead of the next election.

Rage, the youngest SNA commander said the forces have killed hundreds of fighters and recovered weapons including equipment during the intensified military operation that was launched last week.

Al-Shabaab which killed HirShabelle regional MPs and security officials in ambush attacks in Mogadishu-Jowhar Road in the past three years often uses the region as a base to plan attacks, including the car bombs in the capital.

The group had been waging a deadly insurgency for more than a decade to topple the UN-backed Somali government based in Mogadishu and expel the AU troops protecting it.