The state TV reported that SNA repelled an attack against their base in Adakibir village, which is located approximately 60 kilometers east of Adado district in Galgadud region under Galmudug state of Somalia. 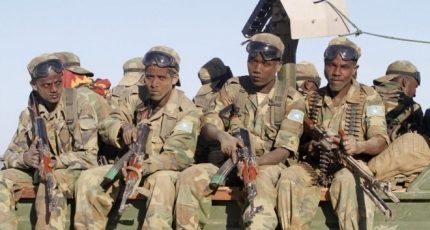 MOGADISHU, Somalia - At least 21 Al-Shabaab terrorists were killed, including senior commanders and scores wounded in central Somalia during a heavy gunfight with the country’s armed forces on Sunday.

The state TV reported that SNA repelled an attack against their base in Adakibir village, which is located approximately 60 kilometers east of Adado district in Galgadud region under the Galmudug state of Somalia.

During the deadly counter-offensive, four Somali soldiers, among them major Ali Agaweyne who was the commander of the military 21st division have lost their lives, according to the state media report.

The Al-Qaeda-linked militant group said it has seized control of the area and inflicted heavy losses upon the Somali government forces. However, Keydmedia could not independently verify such claims.

Some reports indicate that the Somali soldiers have fled to Adado after they were overpowered and their bases ransacked by the militants who later withdrew from the village after a brief capture.

The regions in Galmudug are prone to attacks by Al-Shabaab to the lax security and dominance of the militants in major parts of Mudug, where SNA lost many soldiers in terror attacks.

Somalia is currently facing a potent threat from Al-Shabaab and the election crisis coupled with severe drought impacted the lives of thousands of people, mostly pastoral and farming communities in the south.