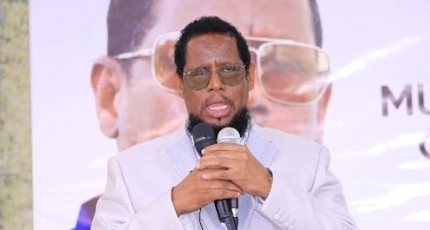 MOGADISHU, Somalia – Mogadishu sees a surge in assassinations against high-profile figures in the public, who dared to criticize or oppose the outgoing president Mohamed Abdullahi Farmajo.

Yusuf Mohamed Siad [Indha-Adde], a retired army general was the latest to be targeted. He narrowly survived being shot by a sniper from a long-distance while juggling on Halane beach.

According to the family, the general was unhurt after one of the snipper bullets hit his hat in what appears the shots were aimed towards his head. The incident took place on Wednesday, Dec 22.

The failed attempt on the general’s life comes just days after he announced his candidacy for a seat in parliament [HOP#138] during an event in Mogadishu with the attendance of elite people.

The shooting raised questions over the safety of the VIPs in the most protected area in the capital, Halane base camp which houses several western diplomatic missions and the AU force.

Almaas Elman, a prominent rights activist was shot dead in the same compound on 20th Nov 2019 shortly after leaving the resilience meeting by the EU for the nearby airport to jet off to Nairobi.

She was the eldest daughter of a prominent peace activist Elman who was killed in 1996 during the civil war for his campaign “Drop the gun, pick up the pen” aimed to disarm the militiamen.

Fahad Yasin, Qatar’s man in Villa Somalia, and Farmajo were accused of plotting assassinations of politicians and military officials against their policy, including Gen Galal who was killed in a hotel attack in Feb 2021.