The US military provides continued air support to their partner Somali forces fighting Al-Shabaab on the ground. 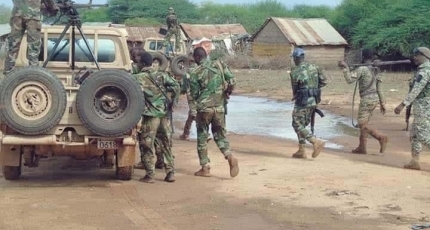 GALKAYO, Somalia - Somali National Army [SNA [ with the support of the Galmudug state troops have executed an offensive on Al-Shabaab bases in areas between Qay’ad and Harardhere in the Mudug region, the transit point of militants fleeing from the south and heading to join their fellow fighters in Puntland's mountain ranges.

Reports from the region indicate that US drones bombed Al-Shabaab camps before the allied forces moved into Qay’ad area, where senior Al-Shabaab had been hiding after losing power.

There was no immediate confirmation of the number of casualty figures as a result of Sunday’s ground and air assaults but residents reported a mounting tension in their villages.

“Fighting and airstrike were ongoing in Al-Shabaab base located between Qay’ad and Harardhere as the joint forces entered the terrorist camp,” said Galmudug in a statement.

The drone strike becomes the third targeted Al-Shabaab in Mudug under Galmudug state within three weeks with officials saying the operations dealt a heavy blow to the militants.

In the past weeks, Galmudug has seen a big military operation by SNA and its Darwish soldiers who managed to liberate Ba’adweyne and Amara from Al-Shabaab during bloody clashes.