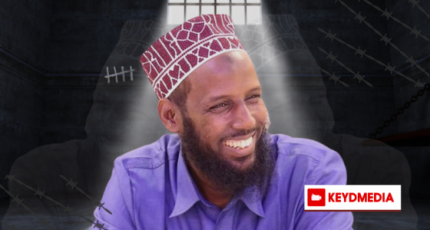 Mukhtar Robow was detained by Ethiopian troops in Baidoa city while he was running for the Southwest State president in December 2018 and handed over to NISA’s former director Fahad Yasin in Mogadishu.

In a statement dated December 26, the minister has instructed the acting NISA director Yasin Farey to submit a detailed and complete report regarding Robow’s continued detention within 48 hours.

The decision came after Southwest state president Lafta-Garen sided with Farmajo against PM Roble in the current political standoff between the top Somali leaders over the elections.

Robow’s arrest described as abduction has sparked deadly riots in Baidoa, about 250 kilometers northwest of Mogadishu, where more than 10 civilians were shot dead by the Southwest state police.

A month after Lafta-Garen, a close ally of Farmajo won the Southwest state presidency, Somalia expelled the UN's top envoy, Nicholas Haysom for raising concern about the killing of the pro-Robow protesters.

Robow, a former deputy leader and spokesman of Al-Shabaab, defected from the group in 2017 and surrendered to the Somali government after a fallout with the group’s leader Ahmed Godane who was killed in a US drone strike outside Barawe port city in Lower House Shabelle in September 2014.

The former militant who turned into an influential politician has announced in October 2018 that he intended to run for the presidency of Somalia's Southwest state and moved to Baidoa, where he run a campaign that ended up in his arrest.