The country has missed the election deadline twice since last December 2020 due to a political crisis and deadlock between the incumbent and regional leaders. 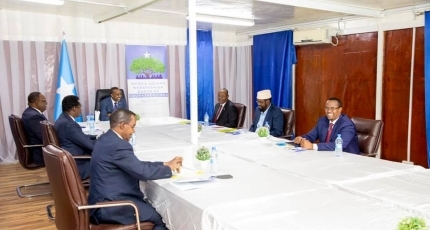 MOGADISHU, Somalia - The leaders of the Somali Federal Government and regional states began a fresh round of talks in Mogadishu to seek a solution to the current electoral challenges that have delayed elections in the Horn of Africa nation.

The meeting which brought together Somali PM Mohamed Hussein Roble and the five regional states in the country as well as the mayor of Mogadishu kicked off at Afisyoni tent near the city's airport.

The key talks, due initially to have started on Thursday, August 19, finally started today with PM Roble tries to hold a free and fair election in the country amid claims of irregularities and fraud in the Senate vote.

During the forum, the leaders will discuss the acceleration of the electoral process, preparation of the procedures for the election of the Lower House, seeking donor funds for elections, and how to move forward.

Senate election which kicked off in the states eary this month was marred by corruption as leaders given power to pick the senators that led to a corruption and vote-rigging.