Somali leaders under pressure to hold election by February 25

The analysts say they are afraid that the leaders could fail the implementation of the new election timetable because of the existing challenges, including the dispute in Hiran and Gedo. 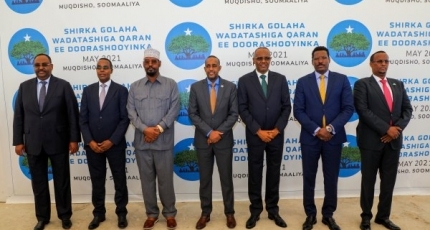 MOGADISHU, Somalia - The UN mission in Somalia [UNSOM] welcomed an agreement reached by the country's political leaders on Sunday that aims to end the electoral stalemate.

UNSOM has called on Somali PM Mohamed Hussein Roble and leaders of the Federal States to expedite the parliamentary election and complete the voting process by February 25.

The priority now is to implement the decisions from the talks to achieve a credible and widely-accepted result by the new deadline of 25 February," said UNSOM.

The UN urged Somali political leaders to continue to work together in good faith and avoid provocations that risk new tensions or conflict and stay focused on delivering a credible electoral process quickly for the benefit of all Somali people.

The UNSOM statement comes amid an unresolved political dispute between PM and outgoing president Mohamed Abdullahi Farmajo, who are at loggerheads over control of the country.

The analysts say they are afraid that the leaders could fail the implementation of the new poll timetable because of the existing challenges, including the dispute in Hiran and Gedo.