The court has acquitted several soldiers arrested on suspicion of a role in the killing of the Hodon district commissioner early this year. 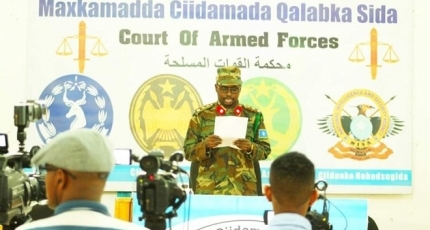 MOGADISHU, Somalia - Somalia's military court has on Tuesday sentenced six police officers to various prison terms for their role in the assassination of Hodan district commissioner Abdihakim Dhegajun on Jan 21, 2021, in the capital, Mogadishu.

One soldier was sentenced in absentia while several officers, including Waberi district police boss, have been acquitted and released from the detention after being found not guilty.

The Mogadishu-based military court said in a statement that the killing was not intentional but an accident and that the officers and soldiers convicted of the murder were sentenced today for negligence and failing their responsibility.

The young DC was shot dead late-night on Jan 21 at Jid-Marehan junction hours after returning from Turkey, where he underwent treatment from bomb blast wounds sustained in late 2020.

In the past, various high-ranking Somali officials were killed in Mogadishu, some in political motivated murder, including Mogadishu Mayor Eng Yarisow, who are yet to receive justice