The country has been trying to recover from three decades of conflict and lawlessness before Farmajo came to power in 2017. 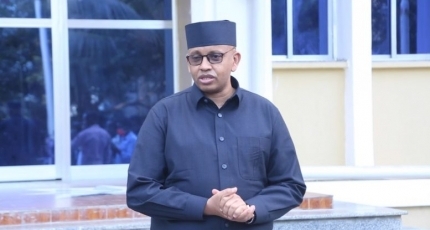 MOGADISHU, Somalia - Somali information minister Osman Dubbe is facing a corruption scandal after leasing land within the National Theater to a private company this week.

The minister, an ally of the outgoing president Mohamed Abdullahi Farmajo, has signed a 20-year contract with the company called Hawo Tako that wants to build a cafe on public land.

After the shadow agreement surfaced, the Somali people both at home and abroad have reacted strongly to this corrupt practice on social media, prompting PM Roble to immediately intervene and ordered Dubbe to stop it.

On Wednesday, the office of Somalia's Auditor General has accused Somalia's information minister of blatantly violating the country's system and illegally giving parts of the National Theater to a private firm in an illegal way.

The Auditor-General has issued a warning to anyone in the public service who tries to manipulate the national asset in violation of the constitution and the system of the Somali government.

The decision to suspend has further fueled political infighting between Farmajo and Roble as the mayor of Mogadishu, who is allied to the president, issued a statement yesterday announcing that he would take over two hospitals in Mogadishu.

One of the hospitals is Yerdemeli, a Turkish-built beachfront maternal & child healthcare clinic was running by education minister Abdullahi Arab, a close friend of the Prime Minister.