Somali minister in trouble after involving in illegal fishing

Illegal fishing off the coast of Somalia has been exploited by high-ranking officials in the Farmajo-led government in Mogadishu. 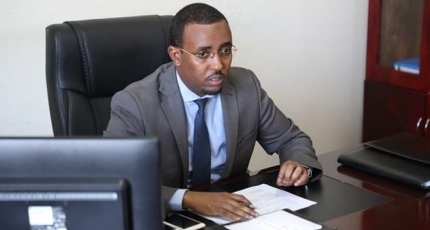 MOGADISHU, Somalia - The state minister for finance Mohamud Hayir Ibrahim says his life is in danger after an investigative report revealed his involvement in the lucrative illegal fishing off Somalia coast.

The bombshell report which was published by the Switzerland-based Global Initiative last Month alleged Ibrahim of being the main facilitator of the Illegal, Unreported, and Unregulated Fishing [IUU] in the country's unprotected waters.

According to the report, the state minister for finance has worked closely with the minister of fisheries and marine resources Abdullahi Bidhan, who hails from Puntland on the issuance of the licenses for the foreign ships and trawlers carrying out illegal fishing.

Ibrahim has rejected the allegations and accused the author of the report - Jay Bahadur who is an Indian-Canadian journalist of hacking his personal Email and taking confidential information during his investigation about the IUU in the Indian Ocean.

He has requested the Kenyan government to deny Bahadur access to work in the country, where is he is based and always wrote reports on Somali affairs, mainly the arms embargo and corruption for international organizations, including Global Initiative and UN monitoring Group.

The minister has been the backbone of the investigation and his hacked Email helped leak information that revealed his role in the massive corruption in fisheries through Puntland-based North East Fishing (NEFCO) owned by former boss, Haji Isse Farah known as [Captain Isse].

NEFCO works with the China Overseas Fisheries Association fishing illegally along Somalia's coastlines for many years, looting the Tuna and other valuable marine resources after striking secret deals with officials at the ministry of fishies and regional states.

Ibrahim who holds Kenyan and Dijobouti passports and minister Bidhan both are from Puntland and they have facilitated NEFCO for reaching several contracts with Chinese fishing firms.

The report accused government officials of taking advantage of the lack of accountability and transparency in Somalia due to the lawlessness and impunity as the country has not had a strong functioning governance system for three decades.

Ibrahim worked for NEFCO before moving to the ministry of finance, where he plotted all fishing-related corruption along with Bidhan, the director-general of the ministry of fishies Mohamud Sheikh Abdullahi and senior advisor Abdirahman Osman, according to the report.

The report shows that the role of Ibrahim was a mediator between NEFCO and the Ministry of Fisheries, which helps prevent NEFCO from removing working permits by the Somali government.

The state minister for finance lodged a lawsuit against Bahadur to the Kenyan government to take legal action over his report that dealt a big blow to him and his team joined hands to make money from the illegal fishing in Somalia.