“Mohamed Mursal had turned Parliament into his own house and army barracks,” said Mohamed Hassan Idris, one of the MPs who participated in the meeting. "We are on the top Al-Shabaab files”. 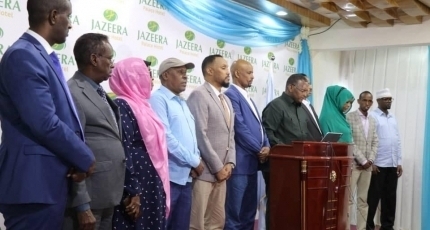 The imminent motion was reportedly signed by about 100 MPs who are expected to forward it to the First Deputy Speaker of the Lower House Chamber of the 10th parliament Abdiweli Ibrahim Mudey.

After a meeting in Mogadishu hotel, the legislators from both the Upper and Lower House of the assembly have declared this week an alliance dubbed ‘National Salvation Cluster’ that unites their dissent voices.

Their bid to table the motion came following the suspension of 15 members from five parliamentary meetings for engendering a riot in the House last Saturday that led to the termination of the sitting.

The suspended fifteen lawmakers were denied access to the parliament building on Wednesday morning to attend a key session after the key roads in the city were sealed off by troops with tanks.

“Mohamed Mursal had turned Parliament into his own house and army barracks,” said Mohamed Hassan Idris, one of the MPs who participated in the meeting. "We are on the top Al-Shabaab files”.

Another MP – Abdullahi Mohamed Nur said Mursal handed over the list of their names to Al-Shabaab defectors trained in Sarindi camp as NISA plain-clothed agents, who are in charge of parliament security

The Pending motion is expected to be tabled before next Saturday session and the speaker who is facing accusations of violating the constitution will have no power to chair, according to the standing orders.

Mursal has long been working on a term extension for Farmajo whose four-year mandate officially ended on February 8, a move that sparked the worst electoral crisis in the Horn of Africa country.