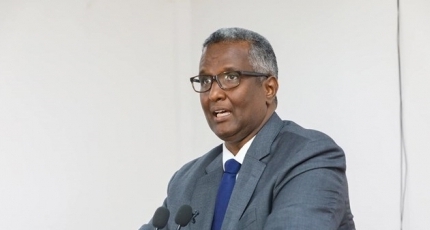 MOGADISHU, Somalia – Somali PM Mohamed Hussein Roble is facing criticism over his failure in holding a timely and transparent election and running the country’s political transition in balance.

Abdirahman Abdishakur Warsame, a leading opposition candidate has accused the prime minister of incompetence and being part of the ongoing crisis in Somalia after he didn’t deliver on his promises.

“The PM promised a free and fair election and seek justice for Ikran Tahlil. He formed a committee for the missing youths sent to Eritrea training whose parents are still awaiting answers,” he said.

Warsame revealed massive corruption in the electoral process as the poll teams continue to register the candidates running for the parliamentary seats while the delegates [voters] are not yet readied.

He said PM’s goals changed following his recent trip to Qatar, a Gulf nation that maintains close ties with Fahad Yasin and Farmajo who helped Doha in gaining influence in Somalia for the past four years.

"The men accused of Ikraan Tahlil’s killing have been cleared of all charges. The Somali boys who went missing in Eritrea were not brought back. All this has happened, following the Qatar trip,” he added.

The candidate also stated that there have been regular flights from Asmara and Doha arriving at a VP terminal in Mogadishu airport for the past months amid ongoing plots to help Al-Shabaab come back.

The candidate’s remarks sparked more reactions among the political elites in Somalia as several officials, including deputy information minister Al-Adala and ex-MP Mahad Salad hit back the allegation in defense of the PM.