The PM has phoned the regional leader who is now in Turkey and delivered a formal apology for the lack of consultations. 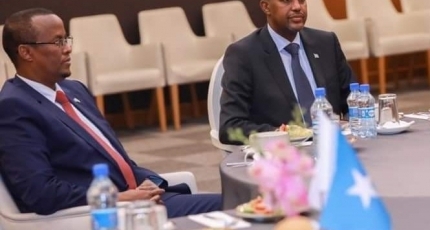 MOGADISHU, Somalia - The Prime Minister of Somalia Mohamed Hussein Rooble has formally apologized to HirShabelle state leader Ali Gudlawe for a "lack of consultation," over key electoral talks planned to open in Mogadishu.

After phone talks, the regional leader who is currently in Turkey has consented to participate in the conference between Somali PM and the presidents of the Federal States via video link or ZOOM. Gudlawe's protest caused the talks to be postponed for two days.

The political leaders are expected to iron out some differences over the electoral process to move forward with the implementation of the May 27 election agreement which was agreed to hold the election within two months. Less than a month has left to the deadline.

Somali PM was tasked with the elections and security after the outgoing president Farmajo to lead the country to a timely election at the end of his 4-year term last February. The incumbent failed to extend power last April after stiff rejection.

The talks in Mogadishu aim to review the progress and the challenges faced by the electoral deal and the leaders are expected to agree on the extension of the election timetable to end the remaining controversial issues.