This comes days after the leaders of the Federal Government and regional states have signed a deal in Mogadishu that ends months of deadlock over the election. 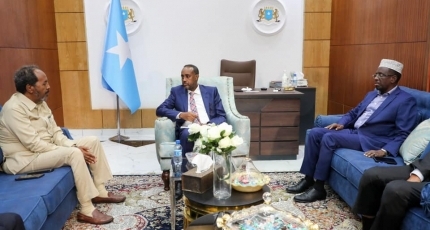 MOGADISHU, Somalia - Opposition candidates led by former presidents Hassan Sheikh and Sharif Sheikh Ahmed have on Monday submitted to Prime Minister Roble a list of spy agents, government employees, and Farmajo supporters to kick them out of the electoral bodies.

The move the clear the two election teams from NISA, civil servants, and Farmajo cronies is part of the recent agreement signed between Somali PM and the leaders of the five Federal States plus Mogadishu mayor in the capital on May 27.

The prime minister seems to be living up to his promise of holding a free and fair election in Somalia in accordance with the electoral agreement that brought to an end to the worst political crisis in the country since Farmajo assumed office in 2017.

The latest talks organized by the PM revived the hope of the Somali people in the election after Farmajo whose term ended on February 8 extended his mandate by two more years, a move that was rejected and led to deadly violence in the capital last month.