Sources have told Keydmedia Online that the ministerial committee tasked with the vesting of the disputed members in the election bodies presented the list from the opposition to Yasin before starting the work. 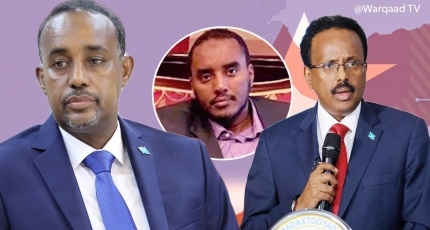 Sources have told Keydmedia Online that the ministerial committee tasked with the vesting of the disputed members in the election bodies presented the list from the opposition to Yasin before starting the work.

The intelligence chief was reportedly rejected the members he included in the poll committees to be delisted but allowed only 34 to be excluded and send back to the Federal States for their replacement.

This is yet another major challenge to the elections expected to be held in July after PM Roble failed in expelling NISA members, civil servants, and Farmajo’s supporters from FIET, SEIT, and dispute resolution body.

“The members rejected by Fahad Yassin are the ones he recruited last year to join the electoral bodies, all of them are NISA officials, and he intends to rig the votes for Farmajo in the coming election,” said an official who asked not to be named.

Abdirahman Abdishakur, one of the opposition presidential candidates said the vetting process was flawed and did not go through a fair and transparent manner as the alleged NISA members were not removed.

Roble's office, according to the critics is politically intended for the decision-making and still faces interference from Farmajo and Fahad Yassin holed up in Villa Somalia, controlling the country illegally.

These new challenges risk the May 27 electoral deal to fail and cause the elections not to take place on the scheduled time, within 60 days period, starting the date the agreement was signed.

Farmajo’s reluctance to hold a peaceful, free, and fair election in Somalia could plunge the nation into another bloody civil war as the opposition and the people are against a new dictatorship after 30 years.

The president whose term ended last February made an illegal extension in April but didn't achieve his will due to pressure from the international community and objections by the local stakeholders.