The country is now headed to an election after the leaders ended their differences through meaningful dialogue. 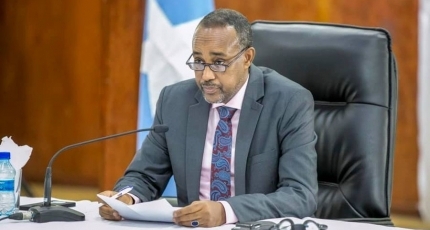 MOGADISHU, Somalia - Somali Prime Minister Mohamed Hussein Roble, along with the leaders of the five Federal States as well as the Mogadishu mayor has met with representatives of the international community in the capital.

PM Roble briefed the foreign diplomats on the agreement reached on the electoral process and his government’s commitment to holding fair and inclusive elections in the country within two months.

The partners praised the electoral agreement signed on Thursday following four-day talks and pledged their unwavering support for the implementation of the deal that ended months-long internal wrangles.

During the meeting, the Somali government has appealed to the international community for financial support to facilitate the upcoming parliamentary and presidential elections.

Farmajo whose four-year mandate ended last February has failed to reach such an agreement with the regional states’ leaders after four rounds of talks in Mogadishu and Dhusamareb early this year.

Talks between Government and Federal Member State leaders that began in March regrettably broke down in early April, leading Farmajo to extend his term by two more years through the Lower House vote.

During his chaotic presidency, the outgoing president has led Somalia into political crisis, uncertainty of the elections, division within the army, and renewal of violence in the country, mainly in Mogadishu.