The election is in Somalia has drawn a boycott by the opposition candidates after witnessing voter fraud and irregularities. 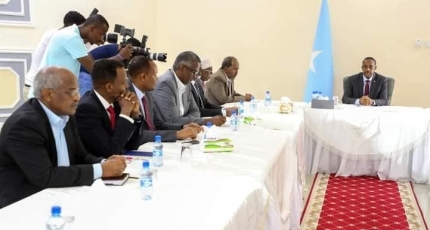 MOGADISHU, Somalia - Amid growing concerns and lack of transparency in the electoral process, PM Mohamed Hussein Roble has convened a meeting at his office in Villa Somalia with the heavyweight opposition candidates on Sunday.

The Union of Candidates and the Prime Minister discussed issues including the country's elections and the transparency of the electoral process in Somalia and how to fix the dispute.

The candidates, including two former presidents - Hassan Sheikh and Sheikh Sharif told Roble that they will not accept the election result if the poll is not held in a free and fair manner.

There have been complaints by several candidates, including ex-house speaker Jawari who were denied to run for the seats in the parliament and they are excluded from the race.

Reports from the talks indicate that PM Roble told the Union of Candidates that he would work to ensure the smooth running of Parliamentary elections as his government was trusted.

On Saturday, the Candidates condemned the looting of the seats in the Lower House by Farmajo and warned of the dire consequence that will result from the postelection dispute.

In the statement, the opposition candidates highlighted the importance of protecting the integrity of the elections and stopping Farmajo from undermining free and fair access to the ballot.