Kenya and Somalia are at loggerheads over maritime boundary disputes which worsened relations between the two countries. 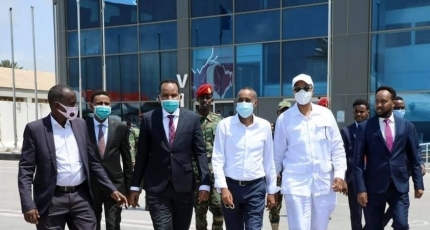 MOGADISHU, Somalia - Somali PM Mohamed Hussein Roble jetted off to Kenya on Tuesday morning on an official three-day visit to the nighbouring Horn of Africa country.

The PM is scheduled to hold talks with Uhuru in Mombasa to discuss the bilateral relations between the two nations during his first trip to Kenya since he took charge last year.

The trip follows a two-day visit to Mogadishu by Kenyan foreign minister Raychelle Omamo who held a meeting with PM and her counterpart Mohamed Abdirizak before reopening Kenya's embassy in the capital after six months of lack of diplomatic representation.

Omamo delivered an invitation from Uhuru to Somali PM to visit Kenya as relations between the two countries making an improvement for the past two months after Qatar mediation.

Roble's Kenya visit comes at a time the country is in an electioneering period with unresolved disputes in the process, including the Somaliland poll committee and Gedo issue, the main obstacles that contributed to delays in the voting deadlines.

The PM is in a deadlock with the outgoing president Mohamed Abdullahi Farmajo over a decree issued last Saturday night which bars the cabinet ministers and government agencies to sign deals with foreign companies and countries.

The office of the Prime Minister rejected Farmajo's attempt to stop the work of the government and termed the presidential decree illegal and unacceptable, a move that fueled the brewing tension between the top leaders.

Kenya and Somalia are at loggerheads over maritime boundary disputes which worsened relations between the two countries. The case is now in the hands of the International court of Justice [ICJ] and expected to issue a final verdict.