The prime minister promised to hold transparent and inclusive elections in Somalia -- a key demand of the opposition presidential candidates. 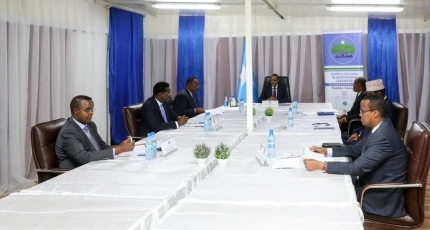 MOGADISHU, Somalia - The embattled Somali PM Mohamed Hussein Roble has on Monday opened a much-awaited vote talks in the capital, Mogadishu amid a soaring political crisis.

The National Consultative Council meeting kicked off at Afisyoni in the facility of Mogadishu airport brought together Roble, leaders of the Federal States, and Mogadishu mayor.

The international partners have repeatedly urged the leaders to convene an urgent meeting to fix the concerns raised by the opposition over the election transparency to go ahead.

Somalia was on a knife's edge since the power struggle between the PM and outgoing president Mohamed Farmajo erupted last month after a coup attempt by the presidency.

Mogadishu saw the deployment of rival factions of the armed forces backing Farmajo and the PM who circled the presidential palace on Dec 27 last year, pushing Somalia to the brink.

The ongoing election forum is focusing on three main agendas - the acceleration of the electoral process, resolving the fraud concerns, and minimizing the number of constituencies.

Some regional leaders proposed to amend the Sep 17 election deal to reduce the number of the voting areas from two to one after they failed to find a solution to the existing challenges.

Jubaland has a problem in Garbaharey, HirShabelle faces revolt in Beledweyne and Southwest fears Al-Shabaab threat to the port city of Barawe. All these are setback to the election.

The ongoing parliamentray election in Somalia took much time and missed its deadlines in 2021 due to the recuurent political rifts in Mogadishu and problemns in the Federal States.