Roble is expected to meet with traditional elders, district rulers, and AMISOM officers to discuss the security of the upcoming Lower House vote which will take place in 11 Somali towns. 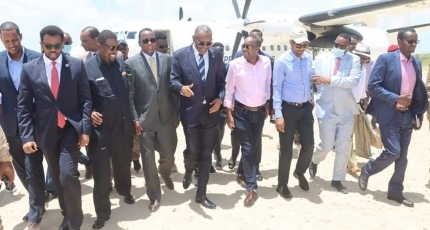 BARAWE, Somalia - The Prime Minister of Somalia Mohamed Hussein Roble has arrived in Barawe, a port city in the south of the country that once served as an Al-Shabaab stronghold.

Upon his arrival at Barawe Airport, the PM and his entourage received a rousing welcome from the President of Southwest Abdiaziz Lafta-Garen, the Speaker of Parliament, regional and district officials, traditional elders, and members from the civil society.

The aim of the PM's trip to Barawe is to monitor and evaluate the security situation ahead of the parliamentary election, according to the source close to the prime minister's office.

Barawa which is a main port of the Southwest State had previously served as a nerve financial center and base for Al-Shabaab before being ejected in October 2014 by allied troops.

Roble is set to meet with traditional elders, district rulers, and AMISOM officers to discuss the security of the upcoming Lower House election which will take place in 11 Somali towns.