The talks come after the Horn of Africa country missed its election deadline on Sunday due to an unresolved dispute over the process. 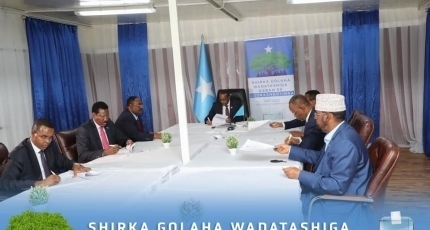 MOGADISHU, Somalia - The prime minister of Somalia Mohamed Hussein Roble on Saturday night held a virtual meeting with the leaders of the five regional states and the mayor of Mogadishu on the electoral process in the country amid delays.

In a statement, the office of the PM said the overnight ZOOM focused on election-related issues, mainly the acceleration of the much-delated process for the election of the Senate which was expected to kick off on Sunday, July 25.

"The Prime minister of Somalia Mohamed Hussein Roble held a virtual meeting with the heads of the regional states in the National Consultative Council and urged them to speed up the Senate election," reads the statement in part.

In addition, the statement further added that the leaders have agreed to resolve the existing challenges ahead of the election to avoid delays as the country has missed the deadline three times since December 2020.

On July 25, 2021, Somalia was set to start the parliamentary election but failed to meet the timetable set by the leaders last May after reaching an indirect electoral deal in Mogadishu, ending a months-long political crisis.

The 54-seat Upper House members will be an election by the regional parliaments in the country as electoral delegates comprising of 27,775 are expected to pick Lower House MPs and then two houses will elect a new president on Oct 10.