The PM is now in Cairo for a two-day visit to Egypt, where he is holding top leaders, including president El-Sisi. 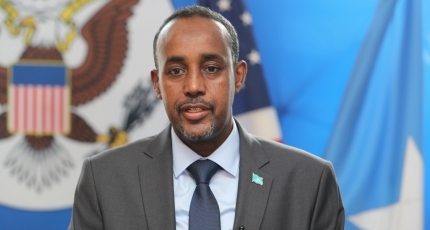 Somalia's diplomatic relations with the two Gulf countries have been at the lowest points during Farmajo's four-year presidency after Somalia sided with Qatar against its rivals after the worst GCC crisis erupted in June 2017.

PM Roble is who currently on a two-day visit to Egypt is expected to leave for UAE and Qatar in the coming weeks after receiving an invitation from Sheikh Khalifa bin Zayed Al Nahyan, the President of the United Arab Emirates and Qatar's emir Sheikh Tamim bin Hamad Al-Thani, according to credible sources who spoke KON.

The outgoing Somali president Mohamed Abdullahi Farmajo whose election on February 8th of 2017 was funded by Qatar has expelled the UAE which has been training sects of the Somali military in Mogadishu from the country to please Doha.

The ties sources after about $9.6 million in cash had been seized by the Somali government from a UAE plane that had landed at Mogadishu airport in April 2018. Abu Dhabi has condemned the seizure of the money meant to pay the salaries of the Somali soldiers trained by the UAE.

The UAE invested in the Bosaso seaport in Puntland, northeastern Somalia, where it also trains local maritime police forces [PMPF] after disbanding its mission in Mogadishu due to the fallout with Farmajo.

The sources added that the United Arab Emirates (UAE) wants Prime Minister Roble to pave the way for the resumption of the diplomatic relations and a cooperation agreement reached in 2013 between the two countries.

Qatar has had an influence in Somalia's politics, thanks to its man in Mogadishu, Fahad Yasin, a former Al Jazeera Arabic journalist who is current serving as the country's Intellgence chief.