The bilateral ties between the two nations deteriorated badly with Somali summoning its ambassador in Nairobi and expelled Kenya’s envoy from the country. 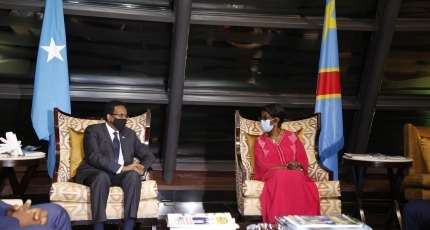 KINSHASA - The outgoing Somali President, Mohamed Abdullahi Farmajo touched down in Kinshasa, the capital of the Democratic Republic of Congo (DRC) on Sunday night on his first overseas trip since his mandate was extended illegally by the parliament on April 12.

Reliable sources within the Villa Somalia revealed to KON that Farmajo is expected to engage in talks with the neighboring Kenya leader, Uhuru Kenyatta over the maritime dispute under the mediation of DR Congo president Felix Tshisekedi who is the current AU chairperson.

Kenyatta is also expected to reach Kinshasa in the coming days.

The bilateral ties between the two nations deteriorated badly with Somali summoning its ambassador in Nairobi and expelled Kenya’s envoy from the country.

The two mainly divided over the maritime boundary dispute with President Farmajo refusing to withdraw the case from the ICJ and solve it outside the court.

The Jubaland which is considered a hub in Horn Africa for Kenya is another factor that is fueling the dispute between Somalia and Kenya. The southern regional state was established in 2013 to serve as a buffer zone to defend Kenya from inside Somalia.

The is the first trip made by the outgoing President whose ruling term ended on February 8 and overstayed in power for nearly two months followed by an extension term made by the acting Parliament that gives him a two-year mandate to stay in power.