Farmaajo whose term as President ended has promised to refrain from becoming a candidate in the next election during his election campaign in 2017. 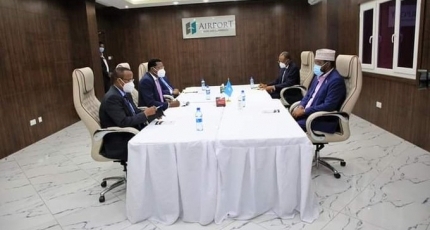 MOGADISHU, Somalia - The leaders of the five regional states of Galmudug, Hirshabelle, Jubbaland, Puntland, and South-western State have held a meeting at the Airport hotel inside Halane Base on Saturday morning.

The leaders will highlight the main obstacles surrounding the country’s upcoming elections and hold an inclusive and fair vote.

The international community has finally managed to persuade leaders to come to face-face informal meetings ahead of the planned conference to take place in an effort to reach unanimous agenda.

Since mid-March, Deni and Madobe have been in Mogadishu with the invitation of the international partners. They declined to attend the Afisyoni conference, citing Farmajo's unwillingness to meet their demand.

Somalia has seen its worst year of election crisis driven by the greediness of the outgoing President who is seeking a term extension.

Farmajo whose term as President ended last month has been accused of plotting the talks to conclude in failure to pave the way for his extension.