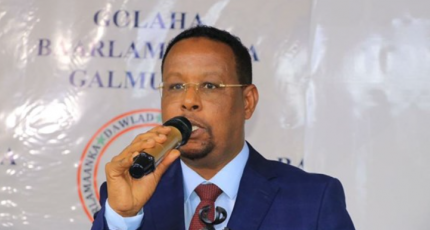 MOGADISHU, Somalia - Senator Yusuf Gelle Ugas is known as [Dhagey] has announced a shocking decision that he stepped down from the senatorial post weeks after his re-election.

In a statement dated 15th Nov, Dhagey said he quit to create a healthy political environment within his Duduble clan after rivalry and divisions over the seat he occupied.

He won re-election on 12th August without facing competition from a rival candidate, who dropped out of the race before the voting begins in Dhusamareb, Galmudug state of Somalia.

Dhagey is a close friend to Galmudug state leader Ahmed Abdi Karie [Qoor-Qoor]. He served as MP in the Lower House in 2004 before joining the first Somali Senate formed in 2016.

Keydmedia Somali Services has learned that both Dhagey and his colleague in the Senate Abdi Ahmed Dhuholow alias [Dhegdheer] to regain their previous seats in the Lower House.

The indirect elections in Somalia are marred by vote-buying and corruption as the people with deep pockets and those allied with leaders in power win the seats in the parliament.