MOGADISHU (KON) - H.E the President of Somalia, Hassan Sheikh Mohamud spoke today on the death of the leader of al-Shabaab, Ahmed Godane: “US forces conducted an airstrike against an identified al-Shabaab training camp in southern Somalia on the evening of Monday, 1st September, using manned and unmanned aerial vehicles against identified enemy personnel and vehicles.
Warar Keydmedia Online
5 September 2014 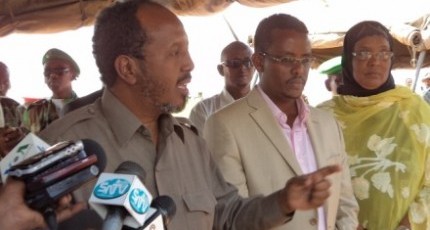 The President continued:  “US forces conducted the airstrike with the full knowledge and agreement of the Federal Government of Somalia (FGS). This is an international battle against the scourge of terrorism and the government and the people of Somalia greatly value the support of our international allies whether it be direct intervention such as on this occasion or longer term capacity building through the training and equipping our reconstituting Somali security forces.”

HE the President commented:  “While an extreme hardcore may fight over the leadership of al-Shabaab, this is a chance for the majority of members of al-Shabaab to change course and reject Godane’s decision to make them the pawns of an international terror campaign.

There is work to be done rebuilding Somalia and the FGS guarantees those who renounce al-Shabaab a chance to take part in that effort.”

HE the President added:  “Those who choose to remain know their fate. Al-Shabaab is collapsing. Our own troops, assisted by the AMISOM forces as part of Operation INDIAN OCEAN are clearing out the remaining pockets of al-Shabaab out of the countryside and allowing the population to see good governance in action.

Security is improving in Mogadishu and in other cities: education, health care, justice, thriving businesses, construction but most of all freedom. We are offering life, not death.”