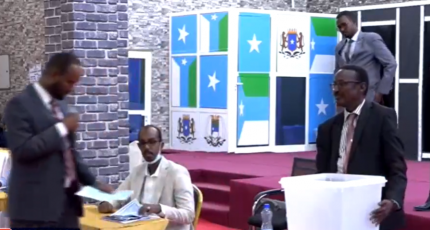 KISMAYO, Somalia - Somalia has kicked off elections after months of delays due to the worst political crisis in the Horn of Africa country since Farmajo assumed office in 2017.

The country began on Thursday the Senate election which was scheduled to take place on July 25, with Jubaland electing the first Senator to the Upper House in an ongoing vote by its parliament in Kismayo city.

Ilyas Badal Gaboose became the first senator to be elected to the new Upper House from Jubaland, the most contested constituency in Somalia.

Ilyas was running against Mohamed Ahmed Sayid, and there was a third nominee for the seat who withdrew. Gaboose received 55 votes, while Mohamed won 17 votes and one vote was invalid, out of 73 MPs voted.

Jubbaland is now electing 4 seats, out of the allocated 8 seats in the Upper House. Southwest state is likely to follow the suit and start the vote for its Senators in the coming days.