The international aid agencies working in Somalia and foreign diplomats attended the humanitarian forum in Mogadishu on Wednesday. 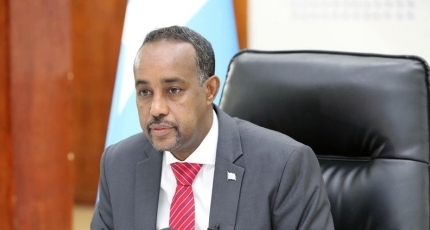 MOGADISHU, Somalia - The Federal Government of Somalia has declared the current drought in the country a national disaster after a humanitarian meeting in Mogadishu Wednesday.

The drought is threatening millions of people in southern Somalia, mainly regions in Jubaland which are located along the Kenyan border, and is creating fears of a catastrophic situation.

Prime Minister Mohamed Hussein Roble has chaired the Somalia Humanitarian Forum in Mogadishu, organized by the Ministry of humanitarian and Disaster Management.

At the forum, which was attended by representatives of the international community and aid agencies, Roble said the failure of the rains caused food shortages and drought in Somalia.

The PM has appealed for swift help from the international community and Somali people to combat the drought in the country which if not acted quickly will lead to a full-blown famine.

The drought in many parts of the country led the pasture and water to become scarce resulting in deaths of livestock and displacement of thousands of people in Gedo and Lower Jubba.

"There is a drought affecting people and livestock in Jubaland that requires joint action to address the situation, I call on aid agencies to contribute to help the needy," Jubaland leader.

Ahmed Madobe has said Jubaland is flooded by people who fled from a drought in northeast Kenya who crossed into Somalia border in search of food, water and pasture for the cattle.

Somali government fell short to respond to the ongoing drought crisis in Jubaland as its people began to die to hunger and thirst in rural areas around Kismayo after water wells dried up.

The UN OCHA office in Mogadishu said the widespread drought left communities devastated, with 80% of livestock lost in the most-hit areas near Afmadow, Luq, Dolow, and Garbaharey.

The UN agency added that the rainfall in the past three days provided some relief, but concerns remain over the long-term effects of dry weather in the Jubaland State of Somalia.

In 2011, tens of thousands of people are believed to have died in southern Somalia after the country was hit by a famine that resulted from a prolonged drought, according to the UN.