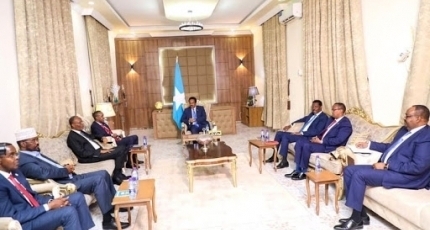 MOGADISHU, Somalia - The conference between the outgoing President, Mohamed Abdullahi Farmaajo, and the regional state leaders that opened today in Afisyoni near Mogadishu airport ended without a result.

Speaking to the local media, Information Minister, Osman Dubbe accused the two leaders of Puntland and Jubbaland of being deeply skeptical about the agreements despite everything they did to keep the discussions rolling and persuade them to break the vicious circles surrounding the country’s future.

“We are here to vividly address to the Somali people that Madobe and Deni are not ready to pay the sacrifices this country owes to them; neither are they willing this country to be taken forward to ensure free and inclusive election based on 17 Sep deal to take place,” he said.

The meeting that took days to yield results with the citizens setting on their eyes closely since then, is raising total concern and grievances over the country’s fate from the public as it bore no fruits.

The future of Somalia itself remains uncertain.