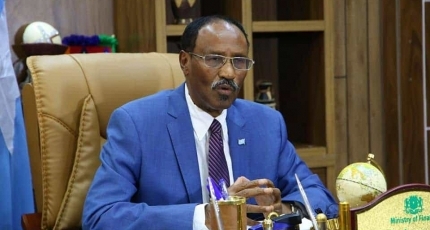 MOGADISHU, Somalia - The long-serving finance minister Abdirahman Dualle Beileh turned down a summon to appear in the office of the attorney general on Monday to face questions over corruption as millions of US dollars from local revenue and donor funds are missing from the 2022 budget, Keydmedia Online has learned.

The minister downplayed the summoning of the country's attorney general which expired today, saying the AG has no authority to question him, in what is seen as a breach of the country's law.

Beileh, who was a close ally of ex-president Farmajo argues that the only person who could summon and question him was the state Attorney General, so he openly declined to heed the call.

The summons came days after the minister said there was not much money in the government's coffers, and warned that the salaries of soldiers and staff could not be paid from this month.

His remarks raised the eyebrows of the government leaders who wanted to minister to be grilled over the missing cash in the budget he submitted and now awaiting parliament approval.

Located in the Horn of Africa, Somalia which has been battered by three decades of conflict is ranked as one of the most corrupt nations in the world by Transparency International due to a lack of accountability.

Sources said the money was misused and embezzled during the electioneering period by Farmajo who used millions of US dollars to buy votes of lawmakers to win his re-election bid.

Farmajo lost in May 15 election to Hassan Sheikh Mohamud, the same leader he succeed in 2017. Beileh is believed to be one of the most corrupt ministers in the government leaving office.

The minister is said to have built big houses and commercial centers in Hargeisa, Somaliland regional state with the public funds. He took advantage of the transition to steal the money.