Somalia has submitted a complaint against Kenya to the UN, just two days after relations between the two countries return to normal. 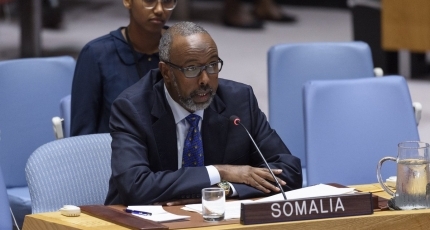 NEW YORK, US - Somalia says it has submitted a complaint against Kenya to the UN, accusing the neighboring country's military of committing atrocities in the border region of Gedo.

Somalia's ambassador to the United Nations Abukar Osman (Baale) has lodged the complaint letter, calling on the UN to launch an immediate investigation into Kenyan airstrikes in Somalia.

The ambassador has added that the casualties resulted from last week's airstrike in the El-Adde town included the deaths of six children and a mother who died in KDF bombardment on residential villages.

The top Somali diplomat at the UN said they have evidence of an "indiscriminate bombing campaign" by Kenyan defense forces [KDF] who are serving under the African Union Mission to Somalia [AMISOM].

This move comes as diplomatic ties between the two countries are now returning to normal after Qatar mediation with each side re-opening its embassy and resuming direct flights connecting Nairobi to Mogadishu.

On Tuesday, dozens of Somalis held a rally outside Kenya's embassy in London, the UK against Kenya’s human rights violations in Somalia's Gedo region, calling Uhuru a "criminal" and must be brought to ICC.