Somalia on the verge of conflict as top leaders’ feud intensifies 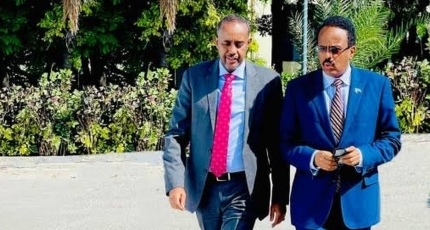 Yasin was named the national security adviser to Farmajo, replacing Abdisaid Muse Ali who becomes Villa Somalia's Chief of staff, a position that was held temporarily by Abdinur.

The country's PM Mohamed Hussein Roble has opposed Farmajo's appointments as an illegal and unacceptable move aimed to cover up the mysterious murder of Ikran Tahlil Farah.

The PM described Farmajo's illegal appointments as an impediment to the investigation and the country's elections while it prevents the defendants from being prosecuted for their crimes.

Farmajo whose term ended in February 2021 has promoted criminals, seeking to thwart the prime minister's efforts to get justice for Ikran Tahlil, who was the head of NISA's cybersecurity.

Fahad Yasin and his deputies are the main suspects in the murder of the 25-years-old girl since she had sensitive information about the recruitment of thousands of Somali youths sent to Eritrea for training between 2019 and 2020 who never returned home and the killing of the Mogadishu mayor Eng Yarisow.

Opposition candidates say Farmajo is an obstacle to the country's electoral process for which Roble is responsible after he failed to lead the nation to a peaceful and timely election.

Residents in Mogadishu fear that the current crisis could turn into a war in the capital after mobilization began on the outskirts of the city where national salvation forces who averted Farmajo's coup attempt in April are now regrouping.