The PM was leading the electoral process in the country as he is the top official responsible for holding an inclusive and peaceful vote. 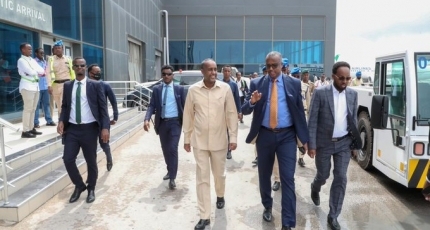 MOGADISHU, Somalia - The Prime Minister of Somalia Mohamed Hussein Roble has on Monday afternoon traveled to the United Kingdom at a time of crisis in the country's elections with his office in charge of administering the process.

PM Roble has been invited to attend the Global Education Conference set to open tomorrow, Tuesday, July 28 in London, which will be chaired by his British counterpart Boris Johnson together with Kenya's President Uhuru Kenyatta.

"The Prime Minister of Somalia departs from Mogadishu and heading to London UK where he will be attending the Global Education Summit on Wednesday. The PM will meet on Thursday with British PM and Foreign Secretary and other international leaders attending the summit," said Mohamed Ibrahim Moalimuu, the government spokesman.

Roble's UK trip comes a day after the country missed for the third consecutive time its election deadline due to a dispute over the process, mainly the electoral body for Somaliland MPs election and Gedo issue which is yet to be finalized.

The delay came following failure by the leaders of the Federal States to submit the list of the candidates running for the 54 seats of the Senate on time, July 24 which showed a lack of commitment to the election.

Somalia faces uncertainty surrounding its future after the outgoing president Mohamed Abdullahi Farmajo failed to work on the polls during his four year-term in office [2017-2021].