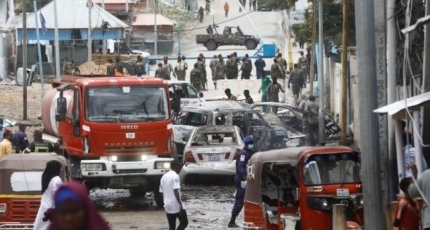 Speaking to the reporters at the scene, Hassan confirmed that a bomber rammed his explosive-packed vehicle into a checkpoint at the busy junction near the statehouse.

Those killed by Saturday's attack in the capital include a mother and her two kids heading to an MCH clinic in the area and the death toll is likely to rise as several are in critical condition.

The morning explosion caused severe damage to buildings on the scene and set fire on dozens of cars and Tuk-Tuk as the latest footage from the site obtained by KON has shown.

A government spokesman Mohamed Ibrahim Moalimuu confirmed that Hibaq Abukar Hassan, a senior adviser to the Somali PM on women and human rights affairs was among the dead.

The Al-Qaeda-linked terrorist group Al-Shabaab has immediately claimed the responsibility for the car bomb attack, adding it targeted Somali government officials driving in the area.

The group didn't say how many people it killed in the blast, which becomes the second car bombing since Yesterday amid a worsening political row between Farmajo and PM Roble.

Despite being ejected from Mogadishu in August 2011, Al-Shabaab still controls vast areas in southern Somalia and carrying out guerrilla attacks and suicide bombings in the capital.