This number did not meet the demand of the opposition candidates who called for the total removal of the list they handed over to the PM. 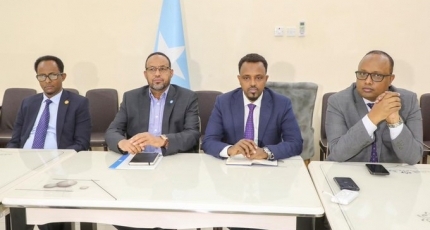 MOGADISHU, Somalia - The ministerial-level committee has issued a list of 34 members out of 67 members submitted by the opposition presidential candidates to PM Roble last week asking to be removed from the country's electoral commissions.

Speaking to the local media late last night, the deputy information minister Abdirahman Al-Adala announced that the committee has worked around the clock the figure out the disputed members and sent them to the regional states and PM's office for immediate substitution.

The move is welcomed as a step towards credible elections in Somalia in July but the list announced falls short of opposition hopes as there are 33 other members remained in FEIT, SIET, and the dispute resolution body, who are not neutral and having close links with the president and country's spy head.

The Union of the presidential candidates led by former presidents have demanded the expulsion of 67 disputed members from all levels of the bodies so that Somalia can go to an inclusive and fair vote that served the interests of the country and the people.

The political analysts believe that agreeing on the way forward may just prove to be the easiest part of this electoral saga in Somalia, a country beset by three decades of conflict and repeated political crisis.

The lack of transparent process and inclusion of civil servants, NISA agents, and Farmajo's cronies in the poll bodies are the reasons that became a setback and led the country to fail in holding timely elections for parliament in Dec 2020 and president on Feb 8.

The provisional Somali constitution states that parliamentary and presidential elections must be held within the government’s four-year electoral mandate. All this didn't happen after Farmajo extended his term by two more years last April.

His illegal extension sparked violence in Mogadishu after pro-opposition forces and the government soldiers clashes in parts of the capital which drove 60,000-100,000 people out of their villages.

Farmajo has disowned the term extension May 1 after pressure from the opposition and international partners, including the US  which threatened visa restrictions on the spoilers of the elections and the peace in Somalia.