The meeting was expected to kick off in Mogadishu on Thursday, August 19 but postponed after the leaders received an invitation from Suadi Arabia. 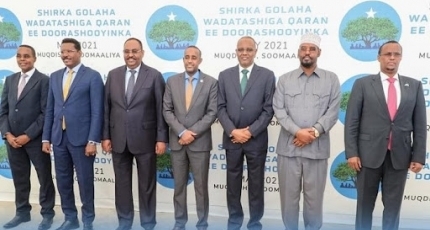 MOGADISHU, Somalia - The top Somali political leaders have postponed a key consultative meeting on the country's troubled elections that was set to kick off in Mogadishu on Thursday.

According to a source privy to Villa Somalia, the Prime Minister of the country Mohamed Hussein and the five Federal States leaders will leave for Saudi Arabia at the invitation of the Crown Prince Mohamed Bin Salman.

Keydmedia Online has learned that the royal invitation is based on an attempt by Saudi Arabia to fix the strained diplomatic relations between the two countries that reached the lowest point during Farmajo's four-year presidency.

This came following PM Roble's three-day visit to Cairo, where he held bilateral talks with his Egyptian counterpart Moustafa Madbouly this week.

Egypt is a close ally to Suadi Arabia and UAE and was part of the Gulf alliance impose sea, land, and air blockade on Qatar in 2017 under Abdel Fattah Al-Sisi's leadership.

The leaders are expected to perform Umrah during their stay in Suadi Arabia, where they are expected to meet with MBS, the de facto King who is working to reset relations with Somalia.