The Lower House chamber consists of 275 seats which make the legislative branch of the country. The time has come for Somalia to finalize the parliamentary election. 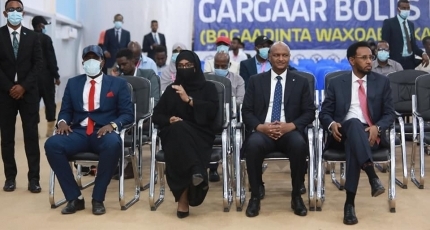 MOGADISHU, Somalia - Somalia has started Monday its Lower House election after months of delays in the long-chaotic Horn of Africa country due to recurrent political disputes.

The indirect parliamentary ballot opened at Gen Kahiye police academy in Mogadishu early in the morning with four candidates, including one woman have run for the two first seats.

During the election, 101 tribal delegates cast their paid votes to pick two MPs with outgoing deputy PM Mahdi Guled winning the first seat after receiving 97 votes in the first round.

Guled who has had an influence in the election process, mainly the seats for the northern region got an easy win against his rival candidate Mushtaq Ibrahim who grabbed 3 votes only.

Bihi Iman retained his seat after winning second-seat. He got 91 votes, defeating his opponent Abdirahman Hassan who received 9 votes in an election marred by widespread vote-buying.

The election cycle which will happen in most parts of the country, mainly in the five regional states due to end with a presidential poll to take place late this year or the start of 2022.