The office of the PM has announced that the two sides also discussed issues related to the election and flood response. 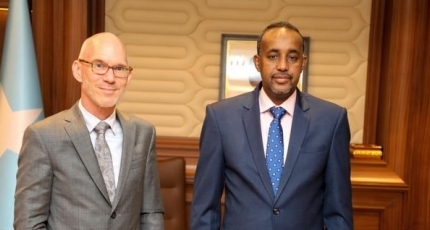 MOGADISHU, Somalia - Somali PM Mohamed Hussein Roble has on Saturday held a meeting with UN special envoy for Somalia James Swan at his office in Mogadishu.

According to a statement issued by the PM’s office, Roble and Swan discussed a range of issues related to the election, recurrent flood crisis, and the Covid-19.

The country’s prime minister assured the UN's top diplomat his commitment to hold a timely, peaceful and transparent election within the agreed timetable.

Roble has asked Swan to coordinate the international partners’ support to Somalia in the fields of the election process, humanitarian, and security.

The PM said he made a lot of efforts in the vetting process of the electoral committees but still, his office faces numerous challenges that need the UN’s help.

Roble is credited to the May 27 election deal with the five Federal States and the mayor of Mogadishu that ended a months-long stiff dispute in the country.

On the humanitarian, the two sides talked about ways to deliver food aid to thousands of Somalis affected by recent river floods in the Middle Shabelle region.

Somalia’s government appealed to the donors to assist in the election funds as the minister of foreign affairs Mohamed Abdirisak says they need over $15 million to hold the vote.