The latest dismissal of the minister comes in the wake of a fallout between the outgoing president Farmajo and his PM Mohamed Hussein Roble. 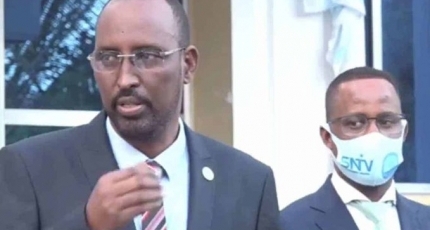 In a statement, PM Roble appointed Abdullahi Mohamed Nur as the new security minister, replacing Hundubey, a close ally to Farmajo. The move has escalated the political tension.

In a series of tweets, Hundubey rejected the dismissal, saying the prime minister is serving on an interim basis and had no constitutional authority to remove him from the office.

Farmajo expressed support for the ousted security minister, and a statement from the president's office said the prime minister can not make a decision to fire cabinet members.

"The dismissal of Internal Security Minister FGS, Hon. Hassan Hundubey is illegal, unprocedural, and unconstitutional. Any Ministerial changes which violate due process of the Somali Provisional Constitution are null and void," said Farmajo in a statement.

The tension between Farmajo and PM Roble is worsening as two rival forces engaged in a shootout at the intelligence headquarters in Mogadishu following the sacking of Fahad Yasin.

Farmajo has been accused by the opposition candidates of plotting to disrupt the electoral process for which Roble is responsible. The standoff risks the security gains made in Somalia.